One day before the launch, we’ve had the chance to play GTA V! But that’s not all – we recorded our first mission so that you can see exactly what the new title from Rockstar is like. 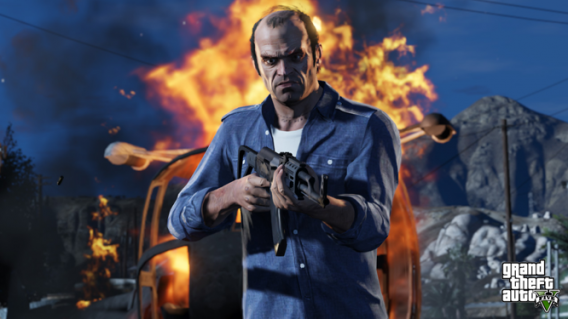 How does GTA V start? With a robbery, of course! In the first scene, we find ourselves armed, in a bank, in the shoes of character Michael. After overpowering security and locking up the employees, we detonated the explosives, blew up the safe, grabbed the money and fled.

Just outside the safe, we experienced one of the most hotly-anticipated new features of GTA V, the character swap – and we switched from Michael’s body to the body of Trevor. Shortly after, the police arrived and started shooting, with a mechanism that seems very similar to that of Max Payne 3.

After the cops rushed to the scene of the robbery, we climbed into the car, but our accomplice was killed at the wheel and we had to take over the driving ourselves. After flying through several intersections, we turned right and found ourselves in front of a roadblock – we avoided being crushed by a speeding train by a fraction of a second.

We set out to find the helicopter that would help us escape, but immediately another one came flying in and hit our third accomplice. Michael was mortally wounded and we had to escape as Trevor.

We’ll keep posting videos, articles and reviews for GTA V so that you don’t miss a thing.